Posted on January 5, 2013 by aboomersvoice

How beautiful is this- All you can see are demonstrators- Everywhere 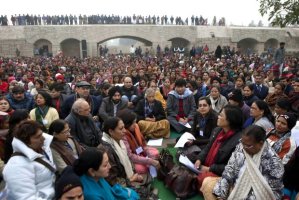 I am a sensitive person. There, I said it. I admit it proudly. I didn’t always. When I was younger, people used to say, “You’re so sensitive,” as if it were a curse. Years later, when I mentioned it to a group of people, a woman said, “You weren’t too sensitive. Maybe they just weren’t sensitive enough.” That has stayed with me. I began to look at it as a gift.

I know when to throw a veil over it to sift out most hurtful or negative words. What seems to accompany the sensitivity trait, is compassion, perception, great instincts, intuition and empathy. It has honestly given me the ability to be kinder, softer and always stand up for the underdog, or those less fortunate.

I can barely tolerate injustice, let alone torture, suffering, neglect or abuse of any kind. It keeps me awake nights. It wraps around my psyche and I have a hard time letting go of the visions. Many don’t want to get involved. None of your business, they will say.

But I am here to say, it is our business. Believe me, the world is one big ripple effect, much like the butterfly effect. When a butterfly flaps its wings on one side of the world, we are affected. For those who aren’t familiar with that expression, it means that a small gesture on one side of the world, can trigger a chain of events, that could lead to larger alterations of the outcome.

But still…. I cannot stop thinking of that woman med student, brutally beaten, tortured and raped in India. I am almost obsessed with it. Everyday, I look for the names of the boys and men- wait too dignified, the savages, who did this. How sick in the soul, does one have to be, to have none of the sensitivity, even a drop of it, to do this ? Are these the people I hear about who are born missing the empathy gene ?

Everytime I read something new about this, I become enraged. This woman was fighting for her life, so she kicked and bit and that got them angry. One man inserted a metal rod into her, doing grave internal damage. The youngest of them, 17, then reached in, and pulled out a portion of her intestines, Then her and her fiance, were stripped naked and thrown from a moving bus. The driver was related to one of the beasts. Someone thought it would be a good idea to run her over, so the driver headed for her, but her fiance, badly beaten himself, moved her out of the way.

So, this is the part where I struggle, If I could have them in front of me, lined up and someone gave me a gun, which I don’t believe in and have argued for reform, would I shoot ? Right now, my initial reaction is yes. I hate to admit it, but I would feel as though I’d be doing the world a great service to be rid of them. Or, maybe they should just rot in some miserable jail for the rest of their lives. Somewhere, in dirty, filthy squalor, with lots of rats, terrible sanitation and horrific food. Those are the nastiest things I can think of, off the top of my head.

I want them to suffer terribly. I don’t think the courts should waste their time or energy on a trial. I am proud of their attorneys. Not one of the 2500, will represent them. Isn’t that fantastic ? Could you even imagine such a concept in this country ?

I have a good solution.  Someone should just open the door to the courthouse or jail or wherever they are being kept. Let them walk out into the crowds. It will take care of itself. I’d like to be there. Right now, I want to stand with the women and men of India that have had huge demonstrations everyday, since this has happened. I applaud you.

The only way to get noticed, is to make a loud enough of a noise. You have, by the masses and if i were there, I would be with you. Even here, on the other side of the world, I am with you and your outrage, as so many of us are. You will create change as long as you are vigilant.

So do I lose all perspective when faced with such heinous crimes against humanity ? Probably. Within a few days of this happening, a 10 year old was fished out of the river there. She had been gang raped, beaten and dumped. It is difficult to have compassion or forgiveness towards people who have such hate and no regard for the body or spirit of a woman or girl.

I had a good friend in the late great Elisabeth Kubler-Ross, a world renown lecturer, author and psychiatrist, who brought to light the 5 stages of dying. She wrote the book on death and dying and taught us all a great deal, about the process. She used to say, “Everyone has a Mother Theresa in them and a Hitler in them.” It makes me feel more human to know that..

I am sorry to say, that today, “I feel like a Hitler.”

First and foremost, I'm a baby boomer and damn proud of it. The ones reading this post survived. Some didn't..We are the generation that crashed through barriers, broke through the norm and made our own rules. We paved the way for others to follow their bliss. One of the largest breakthroughs was probably equal rights and opportunities for women. Thank you Gloria Steinem and Betty Friedan. We burned our bras, well, most of us did. We marched against politics we didn't believe in, staged protests not knowing we could easily be silenced by a bullet, experimented with drugs, meditation and guru's. We traveled with backpacks across the country and throughout the world..We had a voice. We had a choice. We had a mission. We had freedom and we were united. I am a writer, traveler, explorer, observer and participant in life. I am part of the expansion of baby boomers who still believe in the original message of peace and love. Take this journey.with me. Who knows where it will take us next ?
View all posts by aboomersvoice →
This entry was posted in Uncategorized and tagged angry, beaten, compassion, Forgiviness, men, names, perspective, rape, representation, savages, sensitivity, solution, spirit, torture, women. Bookmark the permalink.

18 Responses to Forgiveness or Revenge ?